Unedited writing horrifies me. Not because it’s typically really bad, but because it shows a lack of care for the work people put out there.

It goes along with my thoughts on millennial media — people are more in need of good editors than they are of places to write. For mediums where there are no editors, though, people should really make a better effort to produce self-edited work.

This irritates me beyond belief even outside of my editorial stewardship at The Bottom Line, where I’m loath to receive articles and photo captions that haven’t been through a simple spellcheck. I’m a freelance writer and Yelp reviewer as well, and I see a lot of poorly proofread pieces on other mediums. Yelp is perhaps the biggest offender, because it’s a self-publish review website, and for some unknown reason, people don’t think about the conventions of grammar when typing up horror stories about Starbucks baristas.

Take these two reviews, for example. In the first one, a Yelper reviews a restaurant/banquet hall she visited for a birthday party. 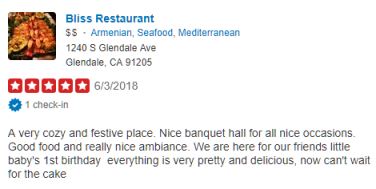 The pros: it’s short and sweet. The cons: it’s a little too short. With the exception of the last sentence, every clause is a fragment that offers a vague description of what the place is about. The final sentence is still a doozy: it’s missing an apostrophe, there’s an accidental double space, and it’s a run-on without a period. 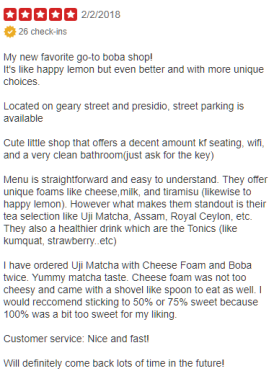 The second review is much longer and more descriptive than the first review, but it falls short in spelling and punctuation. The author fails to capitalize street names and business names, but capitalizes non-proper nouns. There are also some common misspellings in the review, such as ‘kf’ in place of ‘of’, and ‘reccomend’ instead of ‘recommend.’ Other misused phrases/words include ‘likewise to’ and ‘standout.’ Like the previous author, this writer also forgets to double-check for fragments, missing verbs, and sentences missing periods. 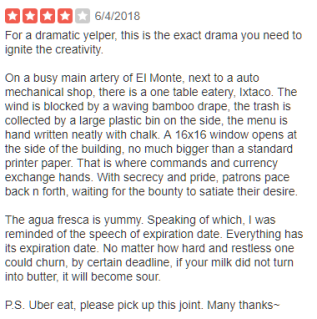 While the third review is briefer than its predecessor, the author really packs a punch with the word choices she makes. The sentences are, for the most part, intact and independent clauses. Although much more inspiring than the other reviews, she frequently repeats words and mixes present and past tense. Only about halfway in did I finally realize that the writer had nothing to say about the food or drink itself, other than describing the agua fresca as “yummy.” The writer also goes on a wild tangent about expiration dates that appears to have no actual relation to anything about the joint. Was she talking about agua fresca? Who knows.

I frequently run into these problems on Yelp. These are actually pretty good reviews in comparison to what I’ve seen floating around the website, but I picked them for this blog post because they exemplified two different styles of writing. They’re also both totally salvageable pieces.

How do you fix pieces like these? The method itself is simple: by typing your unedited work into a word processor like Microsoft Word or Google Docs, you have unlimited access to spellcheck. Spellcheck is one of a computer’s greatest features, in my opinion. It underlines all your misspellings and fragments as you type, turning your document into a horrific mix of RGB colors until you resolve each problem. The F7 key will even tell you why you’re wrong so you can avoid the problem in the future. (Honestly, the pope should canonize spellcheck.)

Reading your writing aloud is also crucial to identifying fragments and missed parts of speech. We all know where we want to pause when we talk. We know when a sentence just doesn’t sound quite right. By

With time, your spelling and grammar skills can get better. Take it from me — English is my second language, technically. I still constantly mix up Chinese and English grammatical conventions and Google “subject-verb agreement” to make sure that I’m speaking correctly.

What’s harder, though, is convincing people that they should take pride in publishing well-written work. My argument is simple: when you publish a piece riddled with errors and filled with tangents, your reader has less incentive to trust you. So if you’re reviewing a coffee shop on Yelp, you’re clearly trying to convince people to either try or avoid the establishment.

“But why bother?,” you might argue. “They’re going to read it and get my point anyway. It’s just Yelp, chill.”

You’re right — it is just Yelp, which restauranteurs and food writers alike denounce for its subjective reviews. The problem, though, is that when over 70 million unique visitors troll Yelp for the hottest eats, your words can make a difference. Even if the platform is about the businesses in the end, it certainly doesn’t help them if the people who say it’s good have a questionable literacy level. And if your point is that the business sucks, well, people are less likely to believe someone who misspells “chow mein” as “ciao main.” If you don’t have an apparent understanding of what the restaurant is or what service a business provides, you probably shouldn’t be trusted.

People should — and do — care about their reputation online. Think about how carefully some of us curate our social media accounts, or how selective some are about what kind of work is published online. Just because Yelp is more ‘fun’ and ‘casual’ than an academic essay doesn’t give it any less meaning. In fact, its worldwide impact should really show its importance over a paper.