During a car ride back to my hometown, my driver asked me what I planned to do with a degree in history and sociology. “Journalism,” I said. “I like writing.”

“Oh? So you mean like, Yelp reviews?” I swore a glance passed between him and his girlfriend, who was riding shotgun.

“Uh, yeah, I do Yelp reviews…” I answered, confused that someone had asked me about a hobby that has little to do with the journalism industry, instead of the ubiquitous “what-newspaper-do-you-write-for” and “kinda-a-dying-industry-don’tcha-think.” Whatever it meant, it became a chance for me to make small talk past the terse “yeah, I’ll get hired someday. We’ll see.”

Food. It’s a comforting topic to me. A sentiment often expressed among my Asian American peers is that food is the way our families show love. My mom is the kind of person who occasionally tells me she loves me, but more frequently, asks if I’m hungry. In fact, when she arrives at my doorstep to visit, or greets me when I come home, the first words out of her mouth will be “have you eaten yet?” 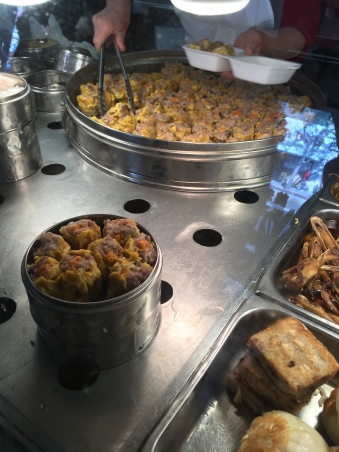 I equate the concept of eating and presenting food to eat as both a display and labor of love. My boyfriend credits me for making him like sandwiches again after I took him to Fat Sal’s for a late lunch one day. My mom raved about Mexican and Cuban food the few times she let me pick where to eat out.

At the same time, watching each dish come out—whether it’s fresh off the flattop at In-N-Out or the only time I paid for high quality sushi—reminds me that for the thriving culinary industry to exist, millions of people work tirelessly during the process. Some are career restauranteurs who like putting fun flairs on food or finagling some strange gastro-chemistry dish. (See: the alarming quantity of perfectly good vegetables pureed into oblivion in fine dining.) Others might be immigrant families opening mom-and-pop joints to support a family with little-to-no transferable skills. Many more exist within the bubble, but it doesn’t overpower the fact that all of these people put in work to make sure food as we know it exists.

As I sat there, rattling off dessert recommendations and where to find the best gyro in the San Fernando Valley, I realized that food is one of those few stress-free things that I can blab about to seemingly no end. People are now starting to ask about post-grad plans. There’s a limited range of emotions (uncertainty, frustration, sadness, anxiety) and a point-blank answer to those questions, most of which now end with “we’ll see.”

I can be certain about one thing, though. Ask me to tell you about food, and I’ll love to.